Property values have ‘stagnated’ so far this year thanks to a decline in job creation and a squeeze on household finances with inflation increasing, one of Britain’s biggest lenders says.

Halifax added that house prices fell by 0.1 per cent between March and April and there has been’virtually no change’ in prices over the past three months. 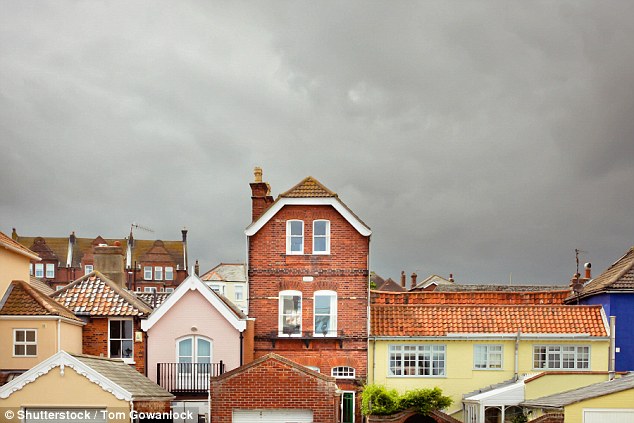 Furthermore, the annual rate of house price growth is still up, albeit more slowly than in recent years. It remained at 3.8 per cent in April, the lowest level since May 2013.

Martin Ellis, Halifax housing economist, said: ‘Housing demand appears to have been curbed in recent months due to a deterioration in housing affordability driven by the sustained period of rapid house price growth during 2014-16.

‘Signs of a decline in the pace of job creation, and the beginnings of a squeeze on households’ finances as a result of increasing inflation, may also be constraining the demand for homes.

‘A continued low mortgage rate environment, combined with an ongoing acute shortage of properties for sale, should nonetheless help continue to underpin house prices over the coming months.’ 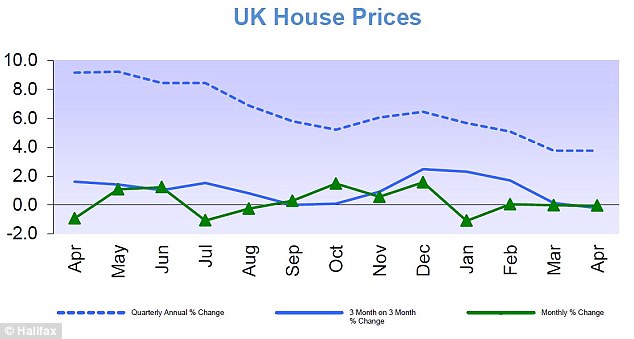 Stagnant: The Halifax price index shows that on a quarterly basis, property inflation has dipped 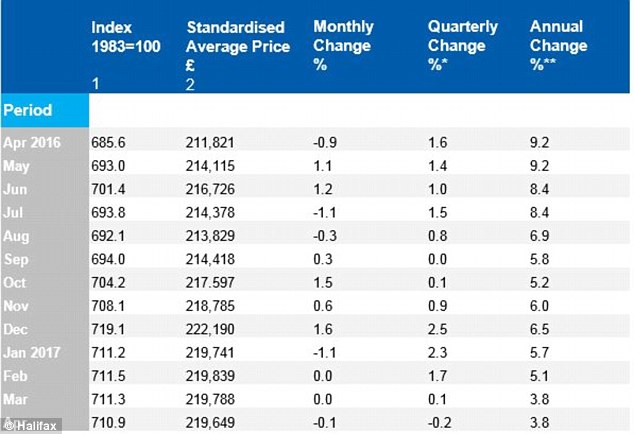 The report also quizzed Britons’ confidence in the housing market. It found that sentiment on whether house prices will be higher or lower in a year’s time has improved slightly.

Nearly six in 10 – or 58 per cent – expect the average property price to rise in the next 12 months, compared to 14 per cent who expect prices to fall.

However, this compares to a record high of 72 per cent who were anticipating price rises in May 2015.

The news come after Bank of England figures showed last week the number of mortgage approvals being made to home buyers fell to a six-month low in March.

It was the second month in a row that the number of mortgages getting the go-ahead for house purchase has edged downwards, with February also seeing a decline.

‘However, a shortage of supply is likely to put a floor underprices. Ongoing very low mortgage interest rates should also help the housing market.

‘We expect house price gains over 2017 will be limited to no more than two per cent – and it could very well be lower than that.’